After slightly over a year of construction, the Centre was built in October 2009. The Minister of Education and Sport of the RS, Dr Igor Lukšič, and the Chairman of the Biathlon Assembly at SAS, Peter Zupan, symbolically cut the ribbon on 13th October 2009 and opened a new Slovenian sports and tourist acquisition that everyone was already anxiously waiting for. Thus an investment worth ten million euros emerged in Rudno polje; it was also financed by the European Regional Development Fund with 6.5 million. The remaining sum was contributed by Fundacija za šport (Sports Foundation) and the Ski Association of Slovenia, which is the manager of the Centre through the company Center Pokljuka d.o.o. and its 100-percent owner.

Construction of Sports Centre Triglav Pokljuka fully followed strict environmental demands; we are aware that the Centre lies within the Triglav National Park, which is why coexistence with nature and the park is ever so important. The Centre strives to burden the natural environment as little as possible and fuse with it as much as possible, which is why the planning stage and later the execution stage made sure that: 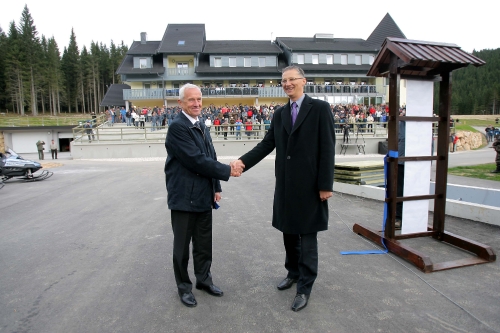 This website uses cookies to improve your experience while you navigate through the website. Out of these cookies, the cookies that are categorized as necessary are stored on your browser as they are as essential for the working of basic functionalities of the website. We also use third-party cookies that help us analyze and understand how you use this website. These cookies will be stored in your browser only with your consent. You also have the option to opt-out of these cookies. But opting out of some of these cookies may have an effect on your browsing experience.
Necessary Always Enabled
Necessary cookies are absolutely essential for the website to function properly. This category only includes cookies that ensures basic functionalities and security features of the website. These cookies do not store any personal information.
Non-necessary
Any cookies that may not be particularly necessary for the website to function and is used specifically to collect user personal data via analytics, ads, other embedded contents are termed as non-necessary cookies. It is mandatory to procure user consent prior to running these cookies on your website.
SAVE & ACCEPT
This is a title